Article in the New Trees Publication, by Louise Brodie

When Trevor Abrahams bought his farm in 2000 on the outskirts of Ceres, it comprised 17 ha of cover crop fields with summer water for 12 ha under pressure. Through hard work, engaging with organised agriculture and help from a supportive mentor, he has expanded his farm to 39 hectares in total with 22 ha under orchard plantings. 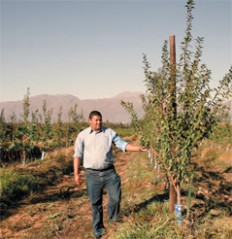 Trevor’s enthusiasm and commitment to agricultural development has been highly successful both on his property as well as his
willingness to invest his time in the cause of development within the agricultural sector.
“Since 2009 the biggest change has been the establishment in 2008 of a new organisation for emerging farmers in the Western Cape,” says Trevor. “I am the president of this organisation, United South African Agricultural Association (USAAA), which currently has 3 800 members. This has taken a lot of time and funding to establish. USAAA has received funds from agricultural assistance entities such as Agrimega, AgriMES and BKB Auctioneers. USAAA now has offices in Paarl with a good management team.

“I am still on the farm full time despite these commitments. Trevor’s Farm now comprises 39 ha in total with 22 ha under orchard plantings. In 2010 I received five hectares of fruit trees from the HORTGRO tree project. This consisted of two popular plum varieties African Delight and September Yummy, white flesh nectarines Arctic Star and Turquoise, dessert peaches Britney Lane and also Forelle pears. The tree project will increase my farm’s production by a third once the trees start producing. The quality of the trees I received is great and they are all growing well. The HORTGRO tree project has set firm foundations for emerging farmers and this could be expanded in the future.

“In my capacity as president of USAAA I have significant insight into the sectors of agriculture other than the fruit industry and it
is clear that HORTGRO represents the sector that has made the most advances in the field of development and research. They are truly leaders in this field. “Experience has taught me that although farming is very fulfilling it is not easy and also very high risk. Many people want land and to become farmers, but do not realise how hard, competitive and risky farming really is. The assistance package from
the Department of Agriculture for emerging farmers has changed and become more realistic. What has become available now makes it possible for small farmers to achieve true economic transformation to progress from emerging farmers to commercial farmers. The level of co-operation between the various relevant government departments has improved and this is working better to assist farmers.

“There is now a more commodity (organised agricultural bodies representing a specific product) based approach. The development
arms of the various commodity organisations are now working more closely with government to support emerging farmers. “Mentorship and neighbourly assistance is vital to the success of these initiatives. My personal experience in this regard has been pivotal in my success. Robert Graaff has been my mentor for twelve years and during this time the services from him, his pack house and his exporter have helped me to establish a successful and growing business. I still have further plans for expansion. “On my farm I am also in a partnership with a French businessman in a Saffron production venture. The bulbs have only been growing for one year and it is still in the development phase.”