Rietfontein receives the Delecta Producer of the Year Award for 2020 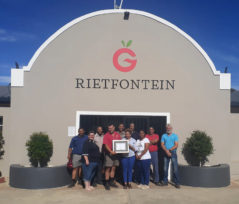 Graaff Fruit’s Rietfontein production unit was recently awarded the Producer of the Year award from Delecta Exports. Rietfontein manager Christi van den Heever says that Rietfontein achieved this accolade as a result of the successful and efficient teamwork within the Rietfontein team. “We believe that a management achieves success when they work together and our team is proud to have received this award prestigious award,” says Christi.