Article in the New Trees Publication, by Louise Brodie

It was action stations at the fruit drying quad at Welgemeen Farm on the day of my visit and the delicious smell of ripe pears hung in the air as workers halved and cored pears for sun drying. Leopont Properties is the management company for Welgemeen Farm, a 120 ha top fruit and stone fruit unit near Prince Alfred Hamlet in the Ceres valley. 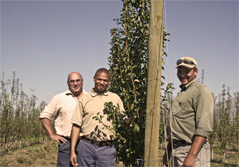 Welgemeen was purchased in 2005 and the beneficiaries of the Lushof, De Eike and Dennekruin Farmworkers’ Trusts (208 in total) own a 60% share and the remaining 40% share is owned by their employers, cousins Robert and Pieter Graaff. The beneficiaries of these workers’ trusts bought their 60% share in the property with a grant from the Land Redistribution for Agricultural Development Fund (LRAD) of the then Department of Land Affairs. Since then the farm has developed 44 hectares of new orchards of which 28 hectares of old orchards were replaced. The varieties of these orchards have been chosen according to the current market demand and include both internationally
sought after grower club varieties as well as the new Culdevco drying varieties.

“We received 3 ha of Forelle and 1.5 ha of Abate Fetel pear trees through the HORTGRO tree project,” says Jacobus Mitas, production manager and shareholder of Welgemeen. “We are thrilled about this as we received exactly what we asked for. We planted these trees in 2009 and they are now at second leaf and growing well.” Jacobus very recently became a grandfather and said that he sees these trees like children to be nurtured as they provide the promise for the future. Simon Langenhoven is the general manager at Leopont Properties and he is very happy with the growth of these trees.

“The directors and trustees of Leopont Properties and the workers’ trust know about the gift of these trees and there is a sense
of excitement about this grant. We have been closely involved with the HORTGRO tree project as the launch of the project by
Minister of Agriculture Gerrit van Rensburg was held here at the Lushof Community Centre,” says Robert Graaff.

“Leopont Properties is now in its sixth year of existence and last year we were able to pay a dividend. This was a total of R1 million split amongst our 208 beneficiaries.”

“When we started the project we said that we would pay out a dividend after five years and we were able to keep to our promise.
This will not be possible every year as it depends on the crop and the market forces,” explained Robert. “The important thing about
the shareholding in the property is that the value of the equity is worth three times what it was five years ago.

“There is a perception within government that equity schemes do not work or do not deliver financial rewards, but they should take cognisance of this real growth. Some of our beneficiaries have passed away and the complexities and cost of sorting out their estates also becomes the responsibility of the commercial entity. This is an unforeseen fi nancial cost of the Workers’ Trust.

“We are grateful for the financial support that Leopont received from both the Department of Agriculture and the Department of Land Affairs. The company has been able to upgrade the farm’s operational infrastructure as well as the housing, crèche and ablution facilities,” says Robert Graaff. “A large part of the success of this project is due to strict adherence to sound management practices and fostering good human relations,” he added.

Subsequent to the interview Robert Graaff added the following. “An application for funding for ten of our workers to receive five ha each, to plant at Romansriver in Wolseley has just been approved by HORTGRO and the Department of Agriculture. This will be in partnership and managed by Graaff Fruit. The fi rst 30 ha will be planted this year, and 37 500 trees will be supplied via this scheme. This is a great opportunity to reward loyal employees within the business, if managed in the correct way.”